Beauty will save the world[edit | edit source]

In the Southern territories Prime is deemed a great gift from the living universe, which marks a new phase in the world’s development. No matter how great the number of human casualties, the “new humankind” marches resolutely forward.

Before the Prime Era, many guests from all over the Imperium regularly visited the Southern Province. This region was renowned for its warmth, sunny climate and incredible nature. It was a popular spot to vacation in, as well as hold various festivals and other outdoor activities. One such festival was held on the eve of the Cataclysm, and many creative professionals arrived here not only from the neighboring lands, but also from the Northern Province. No one could have predicted that they would never return... 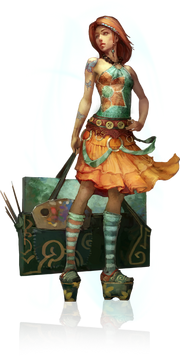 When streams of Prime swept over the world, the Southern region was left at the mercy of this new element. Because the South was mostly lowlands, the damp and marshy terrain was quick to absorb the dangerous substance, which stayed in the soil for a long time. The multitude of people who fell victim to Prime poisoning was inconceivable. Beautiful vistas were turned into bleak dead wooded landscapes. Many of those who managed to survive the first days of the Cataclysm decided to head into the mountains to seek aid and mercy from their Northern neighbors.

With every caravan that departed north, those who remained couldn’t help but feel a growing despair. Prime was already being metabolized by residents of the Southern lands, increasing their emotional and creative capacity, and their intuition. Sadly no one knew this at the time. People justified their decision to stay in various ways, and also tried to dissuade those dear to them from embarking on a perilous path to dubious salvation.

Amagatu, a young southern architect, also felt that the journey north would not only fail to provide relief from the disaster, but would also bring even greater hardship. Sadly, the family of his beloved refused to heed his warnings. The head of the family was more rational than emotional, and his voice of reason suggested that they seek help from relatives in the north. “Look at what has become of our homeland,” he motioned at the uprooted trees in the desolate wastes. “There is no present here, nor is there a future. These lands shall never be restored to life. We must look for a new home. We set out tomorrow.”

Desperate, Amagatu walked circles around his beloved’s house all night, resolved to find a way to persuade her family to stay. When the sun came up, people witnessed the impossible: in the middle of the Prime-devastated terrain stood a beautiful garden with blooming flowerbeds, orchards, and ornate bridges running across soothing streams. In a lovely gazebo of exquisite workmanship slept one exhausted young architect. That night he did more than just save his love and her family from certain death. His heart, overflowing with emotion, had enabled him to discover a pathway to a new magical force, a force to be used by the people of the south.

The survivors of the Cataclysm in the south discovered new and amazing abilities. Their new magical powers allowed them to transform matter with their imagination and emotions. “Transform” is a good word to use; a southern blacksmith cannot “forge” a sword out of thin air, but he can turn a chunk of steel into a sword through magic. The stronger the person’s emotions, the greater the strength of their magic.

This is why those with inherently creative personalities were the first to sense the danger in trying to seek safety in the northern highlands, even to those for whom those lands were home. After all, creativity is largely a product of emotion, inspiration, and being in the moment “right here and now.” Prime greatly amplified these innate abilities, boosting people’s intuitive perception and opening up brand new creative powers.

Intuition alone is often insufficient to perform truly powerful magic. Other necessary elements include a clear vision of the end result, foresight of all the components and their interconnections. This was made obvious in the Keepers’ first attempts to rebuild their homes with the help of the new magic. On the outside, the homes were extraordinary works of art, but there were many internal issues. One house would be missing a staircase, another would have a leaky roof, and one creator managed to forget about windows and doors altogether. Occasionally masterpieces were made even without the requisite knowledge and experience, but those were happy accidents. Nevertheless, in the interest of practical application, the new magic needed a basic methodology.

To discover the full potential of people in the new world, they needed to gain a knowledge of the essence of all kinds of objects and substances. This could have taken decades, but Prime came to the aid of the Keepers once again. Because Prime concentration levels were so high in the South, the substance ingrained itself in the local organisms, allowing them to know objects without having to study them. Prime was revealed to them both as a part of the outside world and of mankind’s inner essence, establishing an intuitive link between the inner and outer cosmos. This enabled people to recognize Prime as part of themselves, the world, the universe. They learned to draw the inspiration to fuel their “creations through passion” from nature itself.

Amagatu continued to play a pivotal role in the new society. His beautiful garden became the epitome of the new creative direction in the Prime World. The architect’s talent and knowledge interwove with the inspiration and beauty drawn from nature, forming a single whole, as magnificent as it was perfect. The garden was visited by people wanting not only to revel in its beauty, but also to hear the master speak. Amagatu was happy to share his newly discovered knowledge with his fellow citizens. He taught them to understand Prime, and to develop their talent through constant practice. To draw inspiration from nature and always strive for perfection. He gave lectures on art and architecture, encouraging others to look at all of the world’s phenomena with new eyes, for true beauty could be found in all of them. Most importantly, he instilled in others the confidence that anyone could become a great master, as long as they focused on honing and developing their talent. “The limits to human abilities are set by people themselves,” Amagatu would tell them. “When Prime came into this world, it helped us to shatter these limits and realize that nothing is impossible. Any summit can be conquered, as long as you are willing to ascend it.”

The new and amazing abilities discovered along with Prime were perceived as the next evolutionary step – an environment-triggered global transformation of people into a “new humankind.” And when communication between the provinces was restored one year after the Cataclysm, the people in the East learned that the ability to create on the basis of Prime was only open to them. It was clear that not everyone had taken this new evolutionary step.

They also learned of their Northerners’ harsh and cold-blooded treatment of the Southern refugees, who tragically perished in their territory, from emaciation, hunger and wounds. Utterly shocked, the “new humankind” denounced their former neighbors and proclaimed their province’s independence. Later, they completely cut ties with the past by announcing the formation of their own sovereign state: the Kingdom of Adornia. They began to call themselves “Keepers” and “Keepers of Adornia,” for they were able to restore the beauty of their lands and preserve their mighty inner spirit, which would carry them through any new trials. Of course, the new state’s foremost value became the freedom of creation in all its forms.

The viceroy of the former Southern Province took the helm as leader of the nation. This post was initially offered to Amagatu, but he modestly and gracefully declined. However, creativity had to assume “a fitting place” of its own in the new state, so the King’s leadership was supplemented by a superior governmental body: the Round Table. It comprised the top masters of all forms of art, including combat and pseudoscience, and the most skillful and respected among them served as the head. The first and Chief Master of Adornia was Amagatu himself.

On the whole, the new nation’s administrative structure was set up to foster the citizen’s emotions, inspiration and creativity. For this very reason Adornia is a kingdom, and its society is aristocratic. This promotes the kindling of passions, which in turns fosters the growth of creativity. And yet the fundamental postulate of the new state was freedom, a fact which was further reflected in the fabric of society. The kingship or queenship of Adornia was not a predestined post, but an elected one in which the sovereign served a sixteen-year term. Similarly, the Keepers’ aristocracy was formed not by birthright, but via masters selecting talented pupils from any social class.

All of Adornia’s social structures, including family, were subject to the concepts of craftsmanship and creativity. As was the case in the other areas of society, the development of an individual’s creative talents took precedence over blood ties and other conventionalities. The role of a father is assumed by the master. The moment an Adornian child begins to express his individual tendencies, he begins his apprenticeship with the appropriate instructor. Eventually the pupils inherit the rights and properties of their master, rather than their blood parents.

The institution of marriage was also rejected, scorned as a rudiment of “old humankind.” After all, any attempts to preserve love by attaching to it all kinds of labels and obligations seemed tasteless and absurd. Love and relationships ought to inspire rather than burden. To this end, bright passions that span several days can enliven the spirit just as much as a partnership that lasts many years. Living right here and now and feeling the full breadth of every moment – therein lies the main principle of Adornian life, which they follow both in their creative pursuits and in their daily lives.

The Keepers’ worldview is, in a nutshell, continuous growth toward absolute mastery. They believe that Prime constitutes a special state of the living world, a new step in evolutionary development, granting the “new humankind” the opportunity to find their place through creativity and self-expression. They are not concerned with the opinions of others, as they are focused on developing their own talents, and, of course, the very joy of creation.

In “creating through passion” Prime is used as an internal resource, the main connecting link between the theoretical concept and its material manifestation. Even now, the southern territories are densely saturated with Prime, but the Keepers depend far more on its high quantities than citizens of other lands. Therefore the areas of Adornian cities where people gather or go for walks are decorated with Prime fountains, with a dedicated reservoir in every home.

To utilize Prime in the field or in combat, the Keepers invented a special technique of concentrating Prime. This process was made possible with the help of nature. The Keepers exercise patience to create beautiful lakes, in which Prime turns into solid crystals. However, because this process takes a lot of time and resources, they have begun to search for new reserves of Prime.

It would be unwise to discount the Keepers’ ability to defend themselves in view of their passion for creating. “To love the fruits of inspiration” can also be interpreted as “to hate the obstacles in the creative process.” From the very outset of their new state, the Keepers knew that the Imperium, a dangerous, cruel and close-minded enemy, one that had inherited the worst ideas of the old world, had established itself nearby. They also knew that sooner or later their interests would clash, necessitating a new terrible war. And the Keepers of Adornia are ready for it.